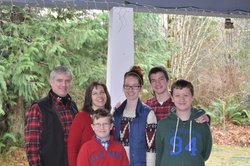 Lee was born and raised in rural farm country just South of Darwin, Minnesota. While growing up there, he helped on the family farmstead putting up hay, harvesting corn and wheat and occasionally helped with milking the dairy cows. He would also work for several of the area farmers doing the same.  These experiences deeply ingrained the importance and benefits of hard work.  Inspired by his fathers service in the US Navy (having served on the USS Enterprise, the Navy’s first nuclear powered aircraft carrier), at age 18 Lee signed up and enlisted. Off to boot camp at Great Lakes, IL and upon graduation landed in Groton, CT for Basic Submarine School. Upon successful completion, Lee was ordered as a non-designated striker to the Ballistic Missile Submarine, SSBN 619, USS Andrew Jackson out of Holy Locke, Scotland.  After qualifying and completing 3 strategic deterrent patrols in the icy North Atlantic it was back to Great Lakes for Hospital Corps School. After graduating 3rd in his class, he trekked West with orders to Naval Hospital Bremerton.  This would be his first trip West of the Rockies. While stationed there, he met his bride to be at a local church young adults group.  After 3 and ½ years, it was off to Physical Therapy Technician School at Fort Sam Houston, Texas.  From there, Lee was stationed at the now non-exisitng Naval Hospital Oakland. A lot of things happened while stationed at this historic hospital.  Lee married his lovely young bride, The Great Quake of 1989, Dessert Storm/ Dessert Shield, plus living on Treasure Island was a challenging treat as a portion of the Oakland Bay Bridge had collapsed. The tour found Lee and wife heading South to Naval Special Warfare, Group One in Coronado, California.  Lee was tasked with developing a physical therapy clinic for the West Coast SEAL Teams. This proved to be one of the best tours of his career.  While NOT a SEAL, he was able to participate in and provide medical coverage for many different training exercises for the SEALs.

From there, it was back to his home state for a tour as a Medical Programs Recruiter.  Lee successfully recruited Doctors, Dentists, Nurses and Medical Service Corps Officers  out of the Tri-State area of Minnesota, Wisconsin and Michigan.  His last tour took him back West to serve with the US Marines at Camp Pendleton, California.  After the billeting dust settled he found himself as the Leading Petty Officer for the 3/1 Battalion Aid Station, home of the Thundering Third. This proved to be another favorite tour of duty and also the last for Lee and his growing family.  A post 9-11-2001  6 month deployment found him plying the waters of the Indian Ocean aboard LHA-3, USS Belleau-Wood supporting Operation Enduring Freedom/Iraqi Freedom.  It was during this deployment the Marines suffered some of their very first casualties of this war. Upon returning from deployment, it was time to retire. Lee moved back to the Pacific Northwest with his growing family and settled in the Poulsbo, Washington area. For the past 10 years, Lee has been working for Assisted Living communities, serving seniors. Many of them from THE Greatest Generation.  Also during a stretch of this time, Lee volunteered as a Fire Fighter for Central Kitsap Fire and Rescue, working side by side with many fine First Responders.

With my history of serving and caring for those who have served, it only felt natural to pursue being involved in the Freedom Heroes Project.  I have long missed the comradery and esprit de corps of working with my brothers and sisters who have served.  Upon hearing about the Freedom Heroes Project, I realized this was a ground breaking opportunity to really help the whole person suffering from PTSD. It is an amazing and exciting concept of focusing on the whole person, not just treating a facet of the condition they face. To know they will not be alone, judged, or shamed but cared for, welcomed and healed would be an amazing honor to be part of.